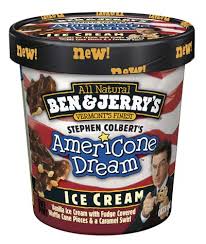 Ben and Jerry’s was founded by Ben Cohen and Jerry Greenfield, who met when they were in Junior High School.  They have been friends ever since then.  Ben and Jerry’s makes all natural ice cream in “euphoric concoctions”.  They also are very aware of the central role that business plays in society.  They make a huge variety of flavors of ice cream.  The newest is called “Stephen Colbert’s Americone Dream Election Edition Superpack”.  It has vanilla ice cream with fudge covered waffle cone pieces and a caramel swirl. Packages have a note from Stephen Colbert printed on the back.  Some of their best known flavors include Chunky Monkey, Cherry Garcia, Vanilla, Milk and Cookies, Phish Food, Late Night Snack, Chocolate Chip Cookie Dough, and many more.  Ben and Jerry’s also has a line of FroYo, which are made from low fat frozen yogurt.  Choose from FroYo flavors like Cherry Garcia, Chocolate Fudge Brownie, Half Baked, or Phish Food.  They also make Greek Frozen Yogurt flavors like Banana Peanut Butter, Raspberry Fudge Chunk, Strawberry Shortcake, and Blueberry Vanilla Graham.  You cannot buy Ben and Jerry’s Ice Cream from their website.  This means that the price could vary depending on where you purchase it at.

At first glance, you might not think of ice cream as the most healthy choice for a snack.  Ben and Jerry’s uses natural ingredients, which makes them a bit more healthy than some other brands of ice cream.  Milk is a good source of calcium, which helps your body to grow strong bones, and vitamin D, which helps your body to absorb calcium.  Their low fat FroYo flavors might be a bit better for people who are trying to lose weight.  Ben and Jerry’s have their headquarters in South Burlington, Vermont.  You can take a tour of their factory.  Check out their Flavor Graveyard, which memorializes all the Ben and Jerry’s ice cream flavors that have been retired, (and that some people really miss).