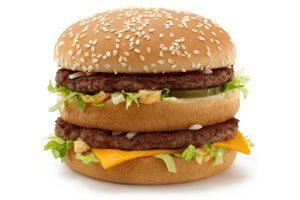 McDonalds has introduced the limited edition MacCoin to celebrate the 50th anniversary of the Big Mac. Each MacCoin can be exchanged for one Big Mac at McDonald’s stores in 50 countries.

In other words, the MacCoin functions like a coupon. Buy a Big Mac – get a free MacCoin. Take that MacCoin to a participating McDonald’s, and get a Big Mac for free.

McDonald’s says the MacCoin is the first fully food-backed global currency. More than 6.2 million MacCoins will be distributed globally in more than 50 countries while supplies last.

In addition to being a fun way to get a free Big Mac, MacCoins are collectible items. These commemorative coins feature five unique designs, each representing a decade of the Big Mac. Each MacCoin design pulls in elements from that time in history, nodding to art, music and pop culture, while the front-side of the MacCoin celebrates the 50th anniversary of the Big Mac.

* The ’70s, showcasing the decade’s flower power
* The ’80s, alluding to pop art
* The ’90s, defined with bold, abstract shapes
* The early ’00s, specifically focusing on the technology that was at the forefront of the turn of the century
* The ’10s MacCoin calling attention to the evolution of communication

The MacCoin has no cash value. You can’t trade them in at a bank for other currency, or use them to buy anything other than a Big Mac. The MacCoins will be redeemable at participating McDonald’s restaurants through 2018.